The biggest conversation on the lending side of Denver’s housing market is “where are the interest rates headed”. Experts are now saying we might see some of the lowest interest rates in history. Of course, we all know how accurate predictions can be… but let’s look at some of the factors driving this.

The biggest conversation on the lending side of Denver’s housing market is “where are the interest rates headed”. Experts are now saying we might see some of the lowest interest rates in history. Of course, we all know how accurate predictions can be… but let’s look at some of the factors driving this. 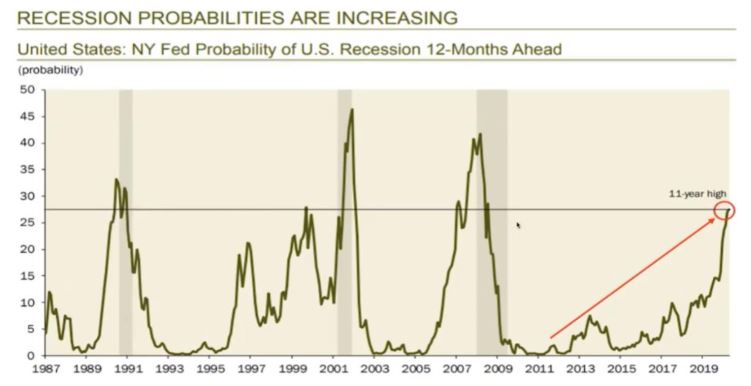 James Bullard, the St Louis Fed President was also quoted as saying, “perhaps there is room for a fed rate cut”. Many predict that we will see a minimum of one rate cut in 2020… some are predicting even more.

GDP and Inflation: What typically drives the fed rate

The 2nd look back at the 1st quarter GDP shows a revised 3.1% growth, slightly above the 3% estimate. Retaliatory Chinese tariffs are expected to impact the GDP negatively by .65%. Additional Mexican tariff’s will also have an impact. GDP is softening.

The Fed’s favored measure of inflation, the Personal Consumption Expenditures (PCE) Report’s headline increased from 1.4% to 1.5% in April. While this looks like a small increase, the previous report was revised lower from 1.5% to 1.4%. The Core rate, which strips out food and energy prices did exactly the same thing from 1.5% to 1.6% only after having been revised down .1% the month before. With both remaining relatively unchanged and below the Fed’s target rate of 2%; mortgage rates will remain low.

The Inversion of the yield curve continues to be one of the best indicators for a recession. When the curve gets inverted, it means longer-term maturities are yielding less than shorter-term maturities... or longer-term rates are lower than shorter-term rates. The 10 and 2-year yields have not inverted yet; however, at the time of this blog, the 10 year is lower than the 1 year and the 2 and 5 year is lower than the 1-year yield.

2020 continues to be the strong winner for the recession and one thing we all know... rates go down in recessions.

So what does a softening economy mean for the Denver market?

The housing market in the 11 county DMAR area remains strong, coming off a slow start. Much needed inventory continues to warm the market. We ended May at 8891 homes for sale, the highest number since November 2013. This number was 26.8% higher than April and 38.12% higher than May 2018.

With this new inventory, buyers had more choices. Under contracts were up 5.65% since April and 10.5% since May 2018. Days on Market was slightly down from last month as buyers are eager to take advantage of lower interest rates and slower appreciation.

No matter what number you look at appreciation remains positive. Year over year median home prices were up 2.38%, since April up 2.26%. This is climbing nicely given the slow start. Remember, 2% growth on a real estate asset gives you the homeowner/investor incredible returns given the power of leverage.

Bottom line... this is a healthy market! Of course real estate is hyper-local, but Denverites, in general, are benefiting from slowed appreciation, low interest rates and more inventory. A slowing economy will give way to a recession... but I’ve been saying it for months... this is one recession we might see best from the rearview mirror. One where the housing market remained strong and opportunities were bountiful.

The views, opinions and positions expressed within this guest post are those of the author alone and do not necessarily represent those of the Denver Metro Association of REALTORS®. The accuracy, completeness and validity of any statements made within this article are not guaranteed. We accept no liability for any errors, omissions or representations. The copyright of this content belongs to the author and any liability with regards to infringement of intellectual property rights remains with them.